Argentine Empanadas have always been my favorite. My mom is from Argentina and her homemade empanadas are amazing! The simple dough recipe results in a buttery, flaky crust and the beef filling is beyond delicious. 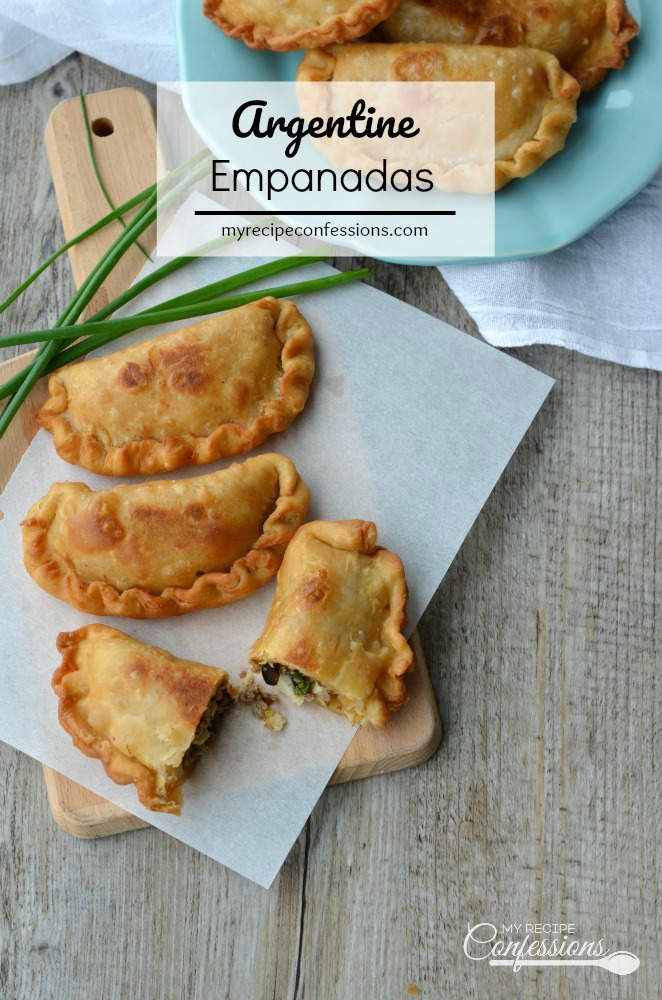 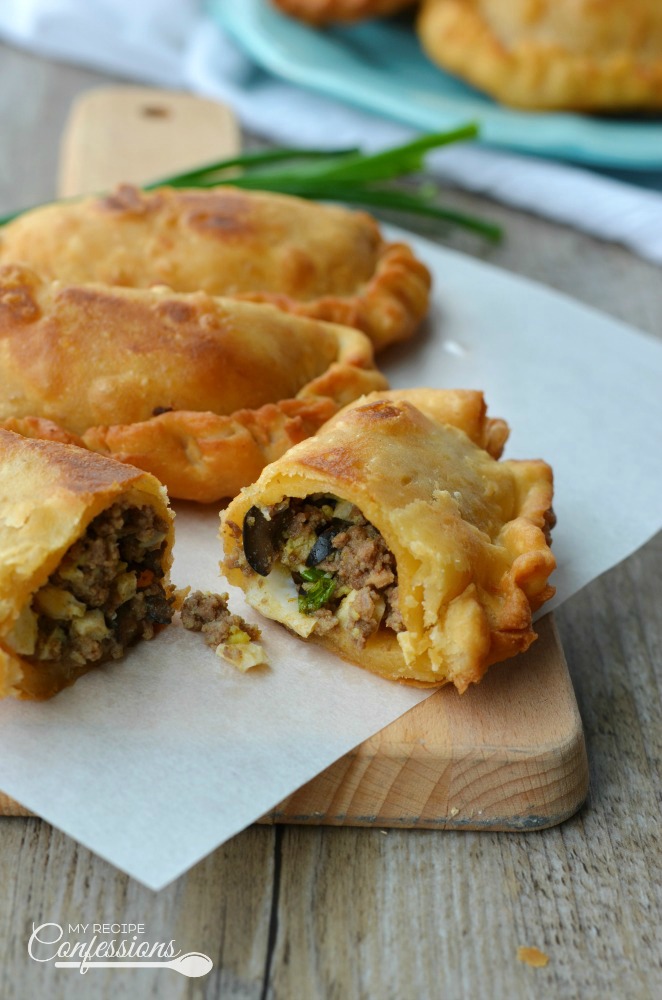 This dough is so yummy and flaky. Some people get intimidated by making the dough from scratch or think that a lot of time is being saved by using the pre-made discs. I promise that making the dough is very simple and it really doesn’t take that long to make. And it tastes a hundred times better than the per-made discs.

One important trick to the perfect flaky dough is letting the dough chill in the fridge.  I have made the dough the night before.  Just keep it in the fridge until you are ready to make the empanadas.

There are many different variations for empanadas depending on where you live in Argentina. Many of the Central and South American counties make different variations of empanadas as well.  I am pretty confident in saying  that I have never had an empanada that I didn’t like. In fact, just thinking about them is making my mouth water! 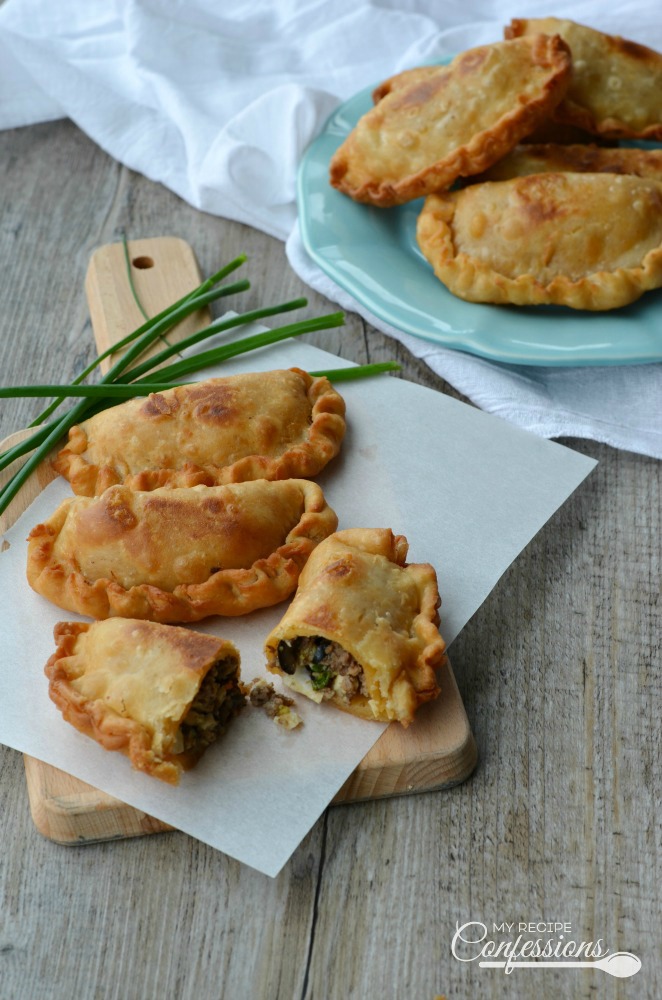 1. Heat the water and butter in a saucepan over medium-high heat until butter is melted.

2. Mix flour, salt, and paprika in a large mixing bowl and make a well in the center of the flour.

3. Pour a little of the hot liquid in the well and mix. Pour the remaining liquid over the dough and mix well. Wrap the dough in plastic wrap and chill in the fridge for at least 2 hours.

1. In a pan over medium-high heat, brown the ground beef.

2. Stir the remaining ingredients into the ground beef.

1. Remove the chilled dough from the fridge and divide evenly into 12 sections. Roll into golf sized balls. 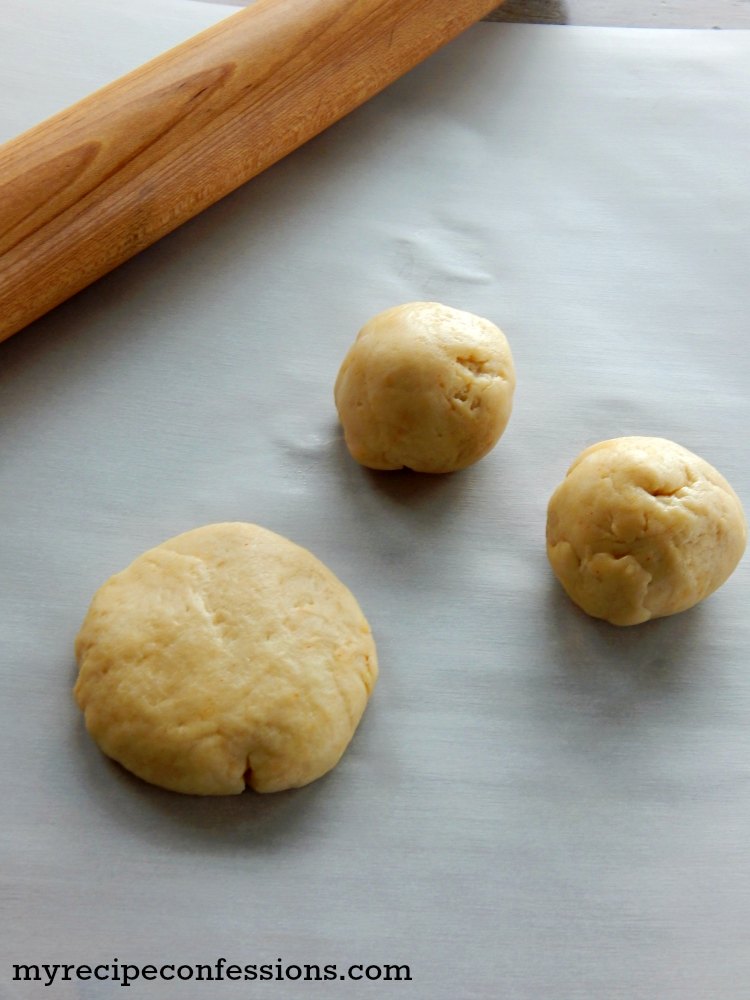 2. Roll each dough ball into a 5 inch circle. 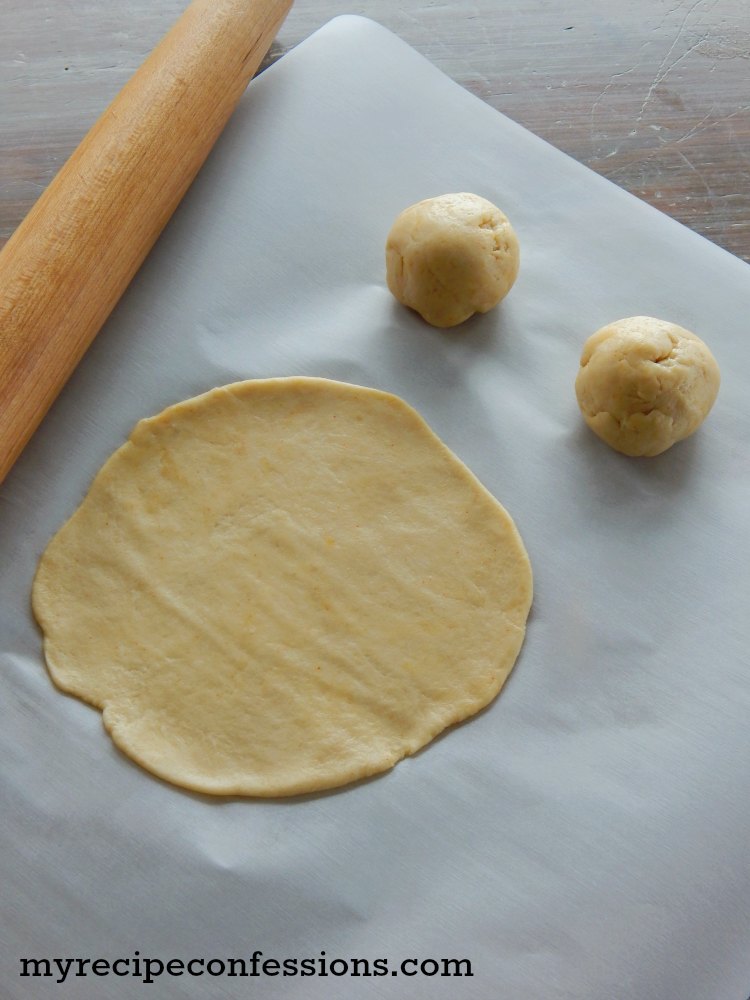 3. Add 2 tbsp. of meat filling into the center of each circle. 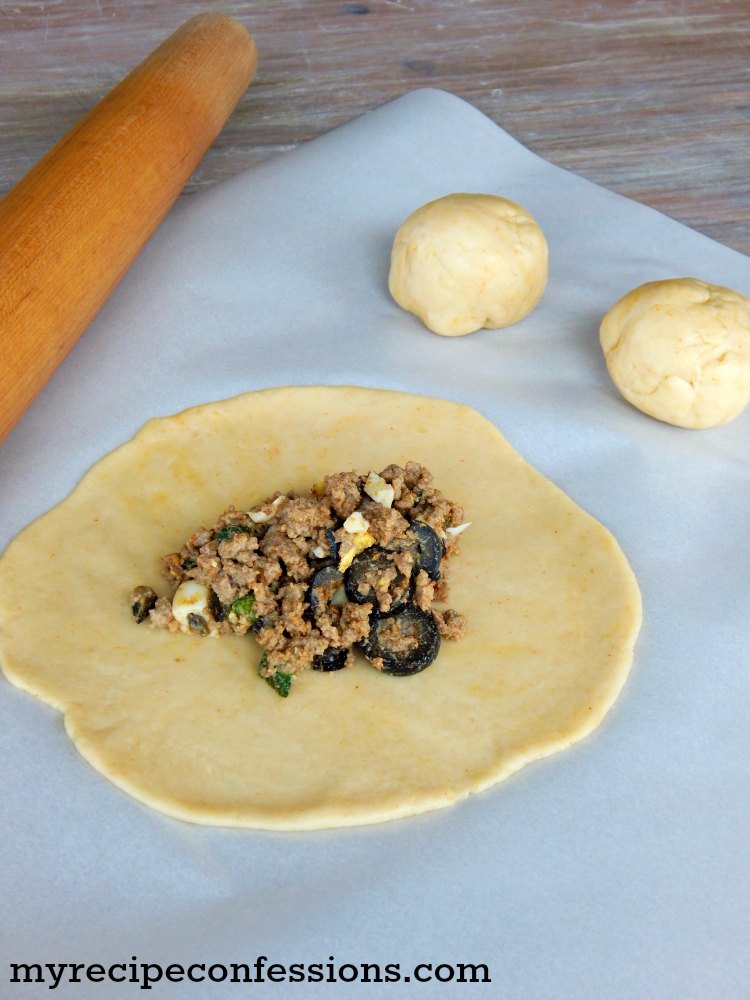 4. Fold half of the dough over the meat filling and press down the edges. 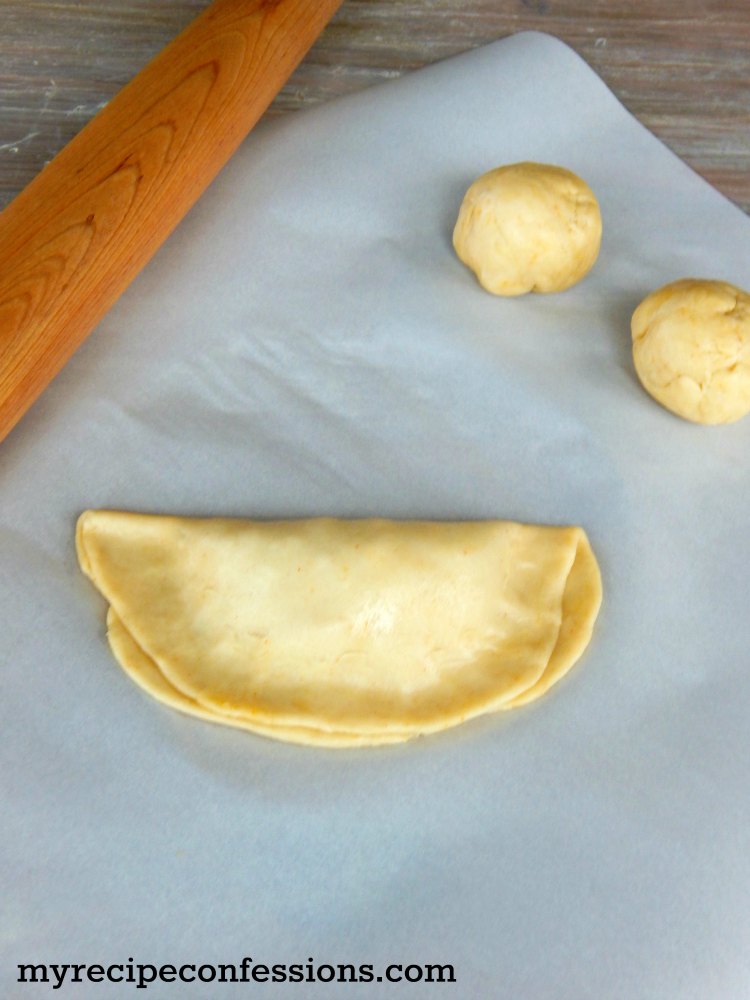 6. Place the empanadas 1 inch apart on a baking sheet sprayed with cooking spray. Place in the fridge for 30 minutes. 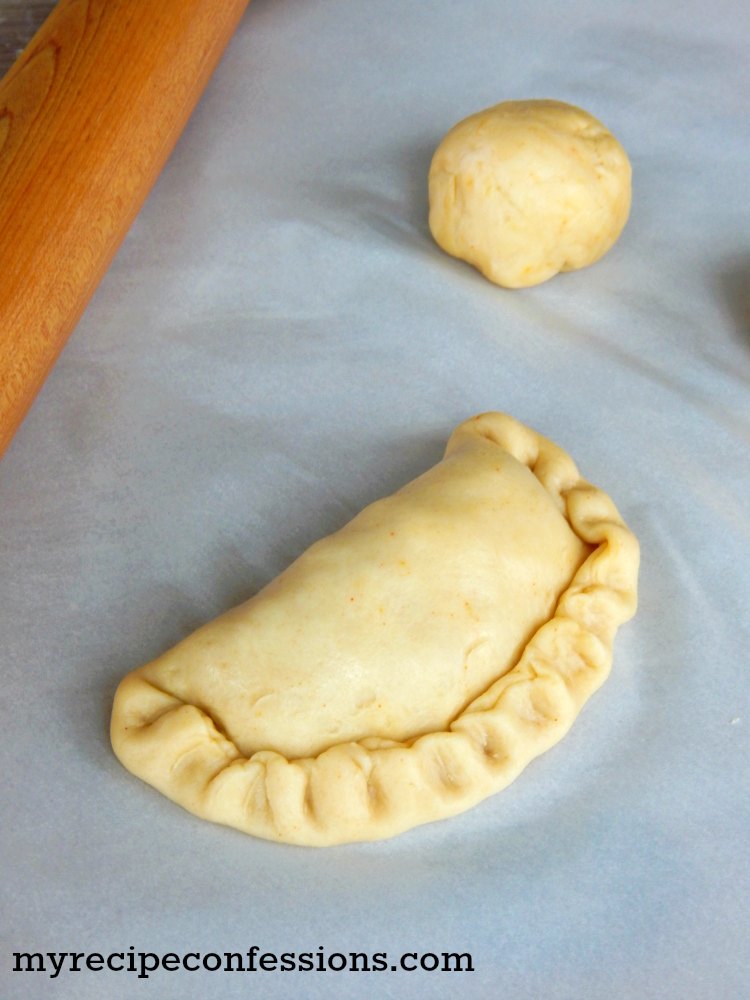 Remove the chilled empanadas from the fridge and bake in oven at 400 degrees for 20 to 25 minutes or until the empanadas are a light golden brown.

Fill a deep saucepan with canola oil to a 2 1/2 inch depth. Heat the oil over medium-high until hot but not smoking. Fry the empanadas until light golden brown and crispy turning over once. Place the cooked empanadas on a paper towel lined plate to drain the oil.

* Be very careful while frying the empanadas. The oil will get very hot and can cause severe burns or even a fire. Make sure to keep children away from the stove. The oil can splatter and burn them.

The empanada dough recipe is adapted from userealbutter.com.

This recipe was originally posted on March 3, 2015. 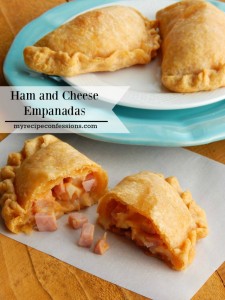 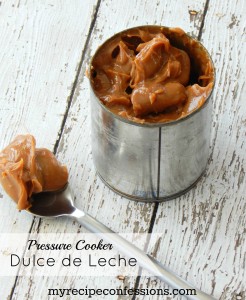