Today I want to share with you a product that I use A LOT in my kitchen. It is Better Than Bouillon. 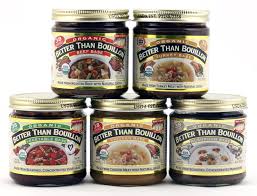 Better than Bouillon is a concentrated stock base.

What is stock? “Stock is a flavorful liquid prepared by simmering meaty bones from meat or poultry, seafood, and/or vegetables in water with aromatics until the flavor, aroma, color, body and nutritive value are extended. The liquid is then used to prepare sauces, soups and as a braising and simmering cooking medium for vegetables and grain”. (The Professional Chef, The Culinary Institute Of America)

Although nothing will ever really compare to a perfectly made stock. Sadly, it isn’t always very realistic to make. I’m sure you are with me when I say I don’t generally have enough time to make stock and I certainly don’t have enough freezer space to store it. So, I do the next best thing. That for me has been using Better Than Bouillon. The flavor of this compared to a can of broth that you buy at the store is night and day. If you don’t believe me, I dare you to compare the two.  Whenever I open the Chicken Better Than Bouillon, it smells like homemade chicken noodle soup. The Beef base smells like a tender and juicy roast you just pulled out of the oven. I use the Turkey base on Thanksgiving. I like to brine my turkeys and because of this there isn’t a lot of juice that escapes the turkey. So I use as much of the juice I can get and use the turkey base to make up the difference.

It also is so much more cost-effective than buying the cans or boxes of broth. It only takes one teaspoon of the base for every cup of boiling water. From one 8 oz. jar of Better Than Bouillon you can get about nine and a half quarts of broth.

You can buy Better Than Bouillon at pretty much any grocery store. I like to buy it at Costco. They sell it in a larger jar and it is usually the same price as the grocery stores smaller jars. However, they only carry the chicken and beef base. So for all the other flavors, you will have to go to your local grocery store for those.

Better Than Bouillon comes in a wide variety of flavors such as, beef, chicken, vegetable, au Jus base, ham base, fish base, lobster base, mushroom base and turkey base. They also come in organic, reduced sodium, kosher, and vegetarian varieties.

I use Better Than Bouillon in all my soups and sauces. Give it a try. I know you are not going to be disappointed!

« Grilled Pork Chops With Apple Chutney
And the winner is…. »