I started out on the path to make one wreath and I ended up making one completely different. I fell in love with Domestically Speaking classy Spring fever wreath. I knew it would look perfect on my front door.

So I bought all the supplies and began the grueling task of wrapping the jute around the wreath. I have made wreaths this same way before. Only I had used yarn and trust me, it takes a few hours. I loved the look of the jute so much, I knew I had to do it anyway.

I had to split the project up between two days because with two little ones at home with me, I am a bit short on free time. The first day I wrapped the wreath with the jute. The second day I made the coffee filter flowers. After playing around with the design of the flowers for a little while, I decided to go with a slightly different look than the Domestically Speaking flowers wreath.

I had to quickly run to JoAnns craft store to get the buttons for the center. I was so excited because I was so close to finally being done and being able to hang my beautiful wreath on my front door.  As I was picking out the right buttons at Joann’s, I got a phone call from my daughter. She so lovingly informed me that my baby (he’s 2), broke my wreath into four pieces. I wanted to cry to say the least! 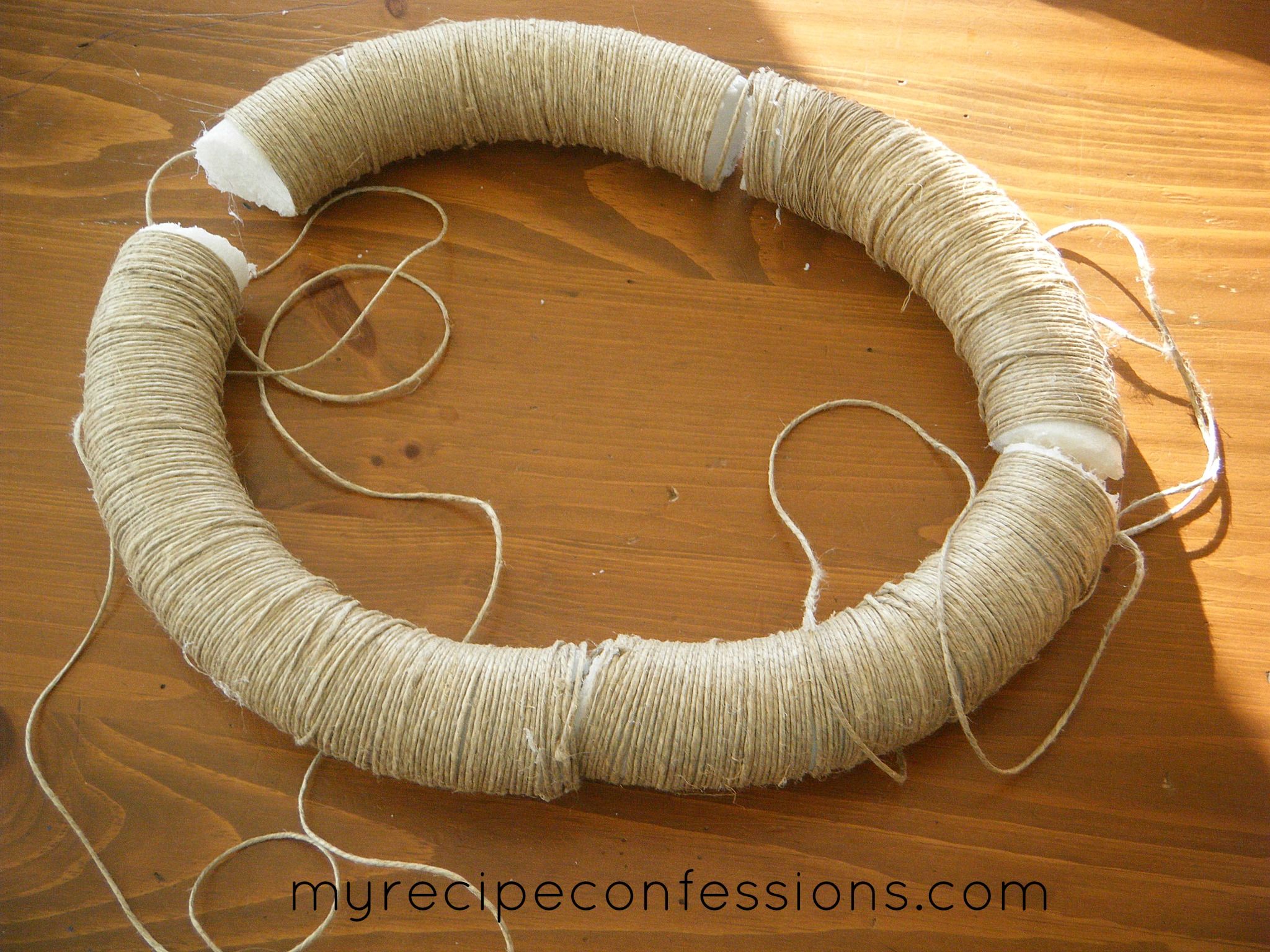 My sister who was with me suggested I use the straw wreaths instead of the styrafoam wreath I had used. She likes to use them because they are cheaper and they won’t break like my styrafoam wreath did. 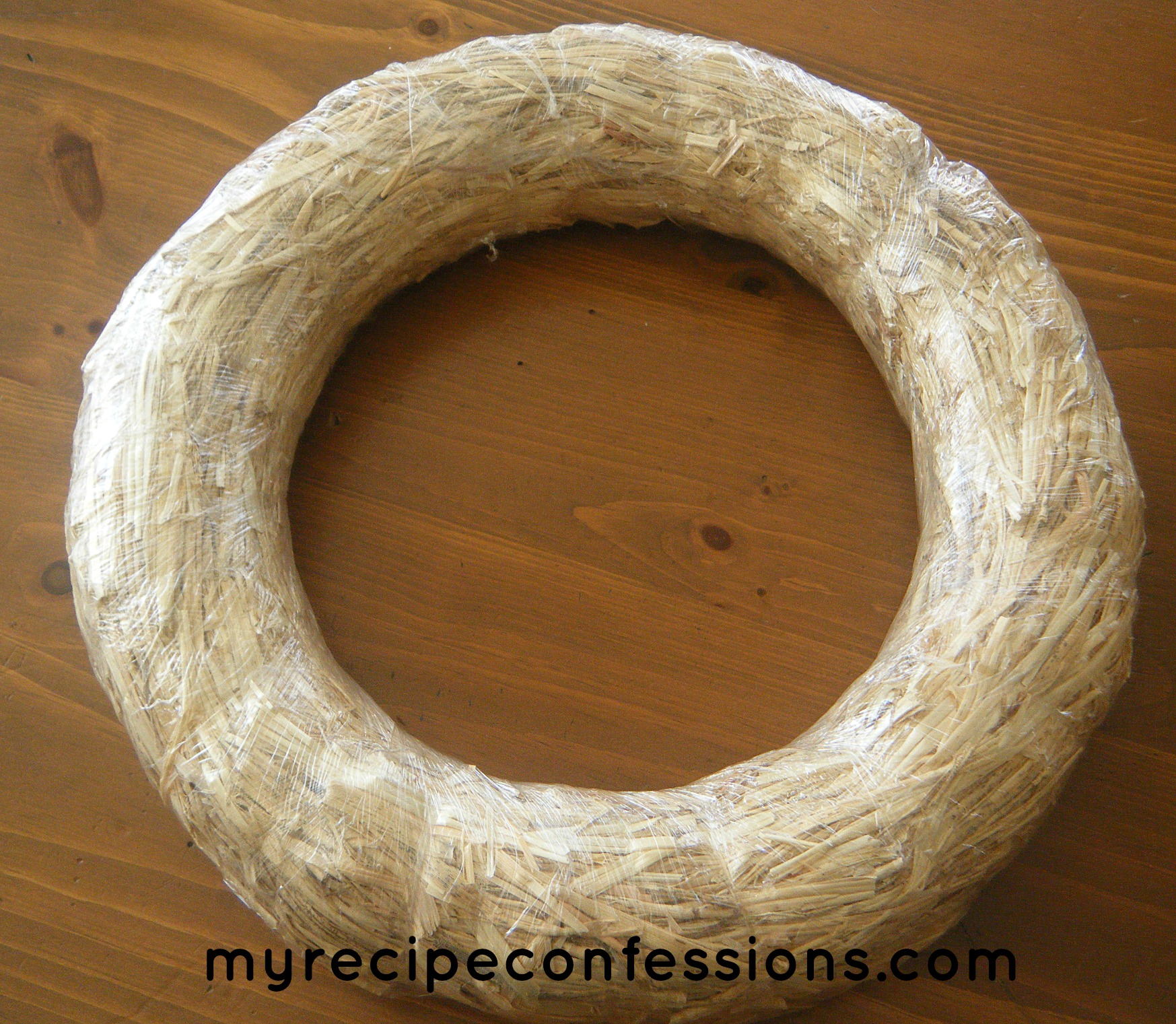 I must say, I am very pleased with the results. I just wish I had known about them before I started so I would not have had to waste all that time. I guess I can chalk it up as another life lesson. 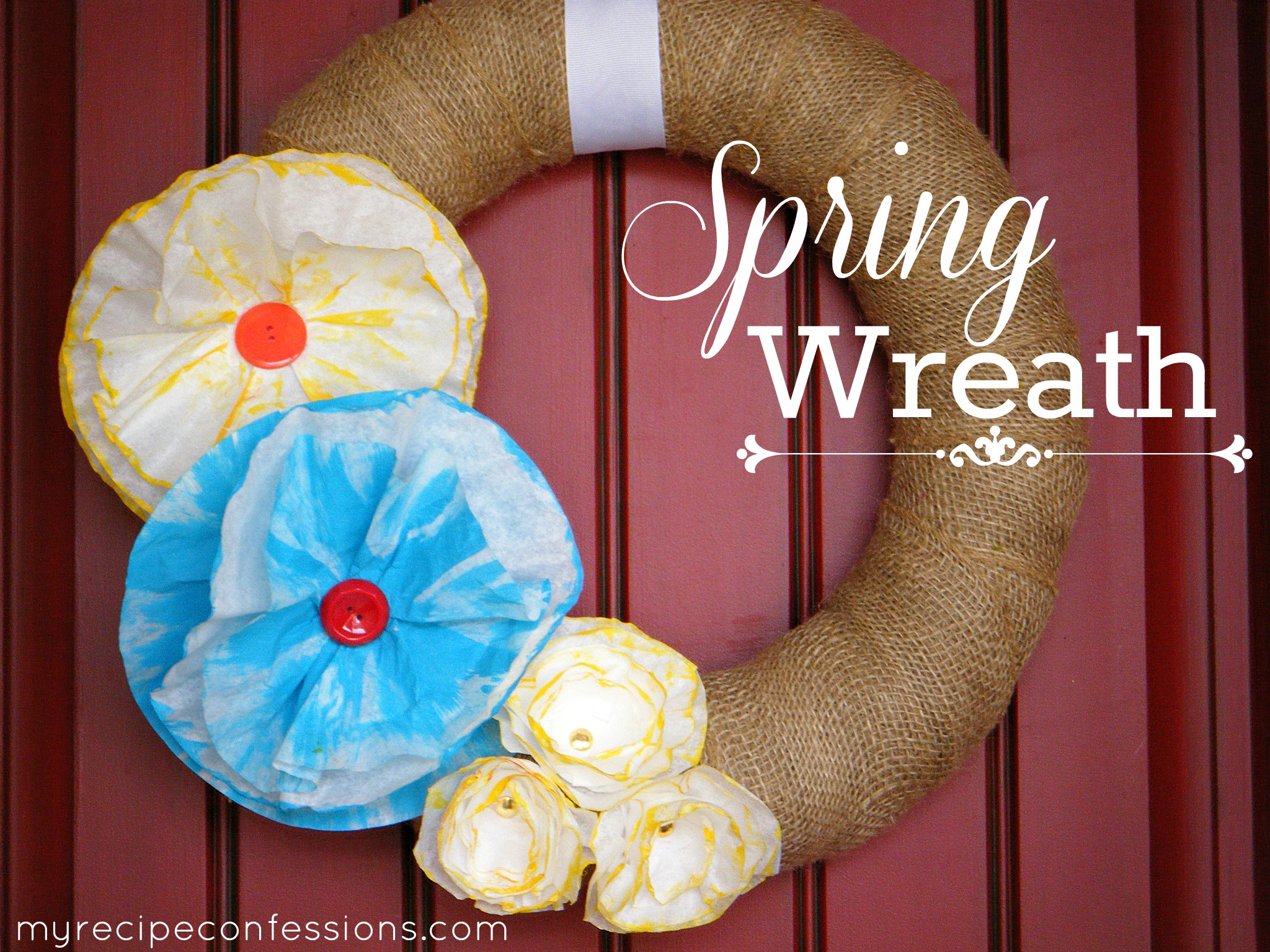 1 roll of 6 inch burlap ribbon (I don’t know exactly how much I used, but I didn’t use the whole roll) 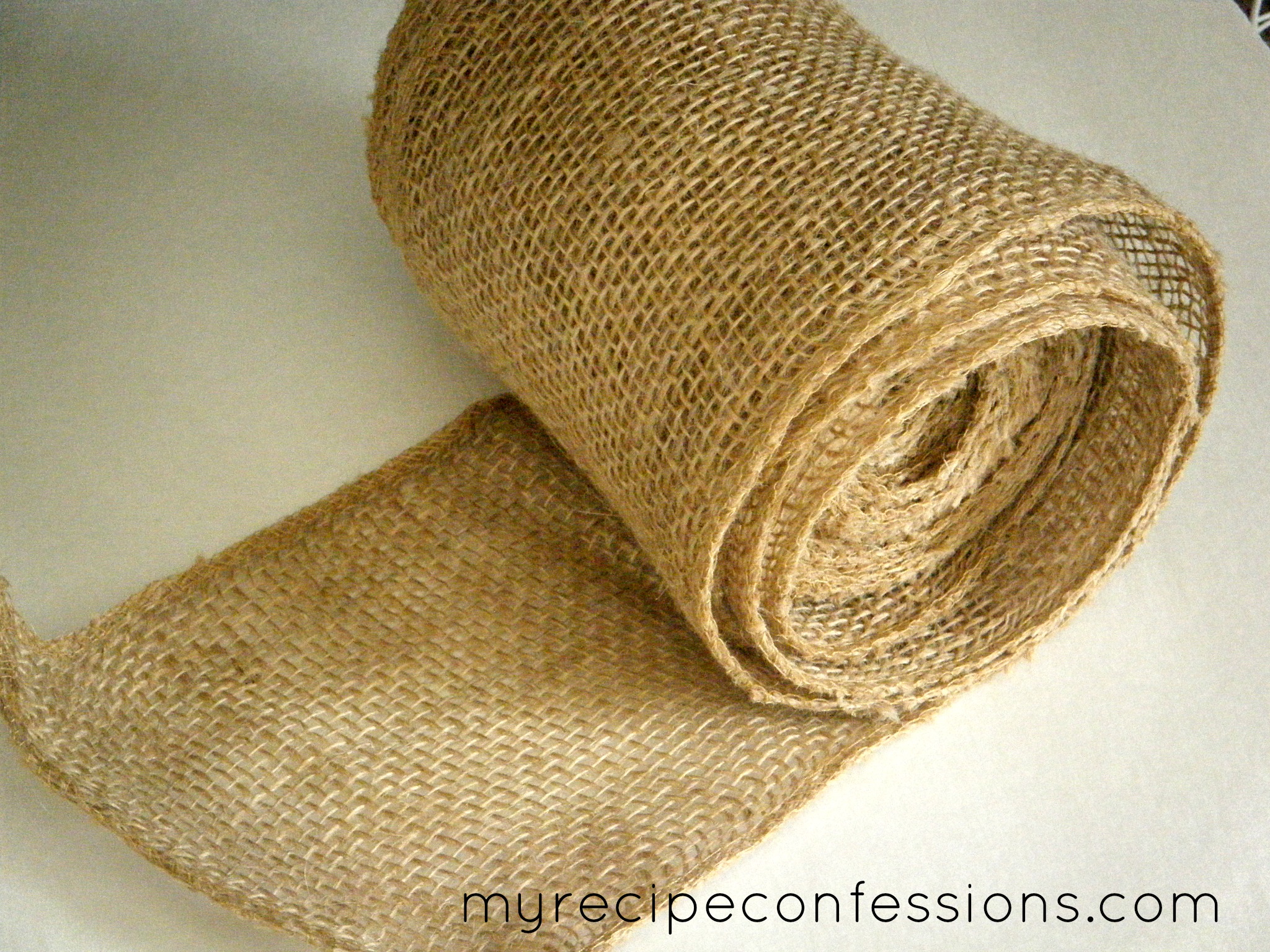 2. When you have wrapped the wreath completely with the burlap, glue the ending strip of the burlap down with the glue gun.

3. For flower #1, I used a torquise acrylic paint. To make the first layer I folded the coffee filter in half and then in half again. Then I dipped the foam brush into the paint and lightly brushed the tops of the coffee filter. 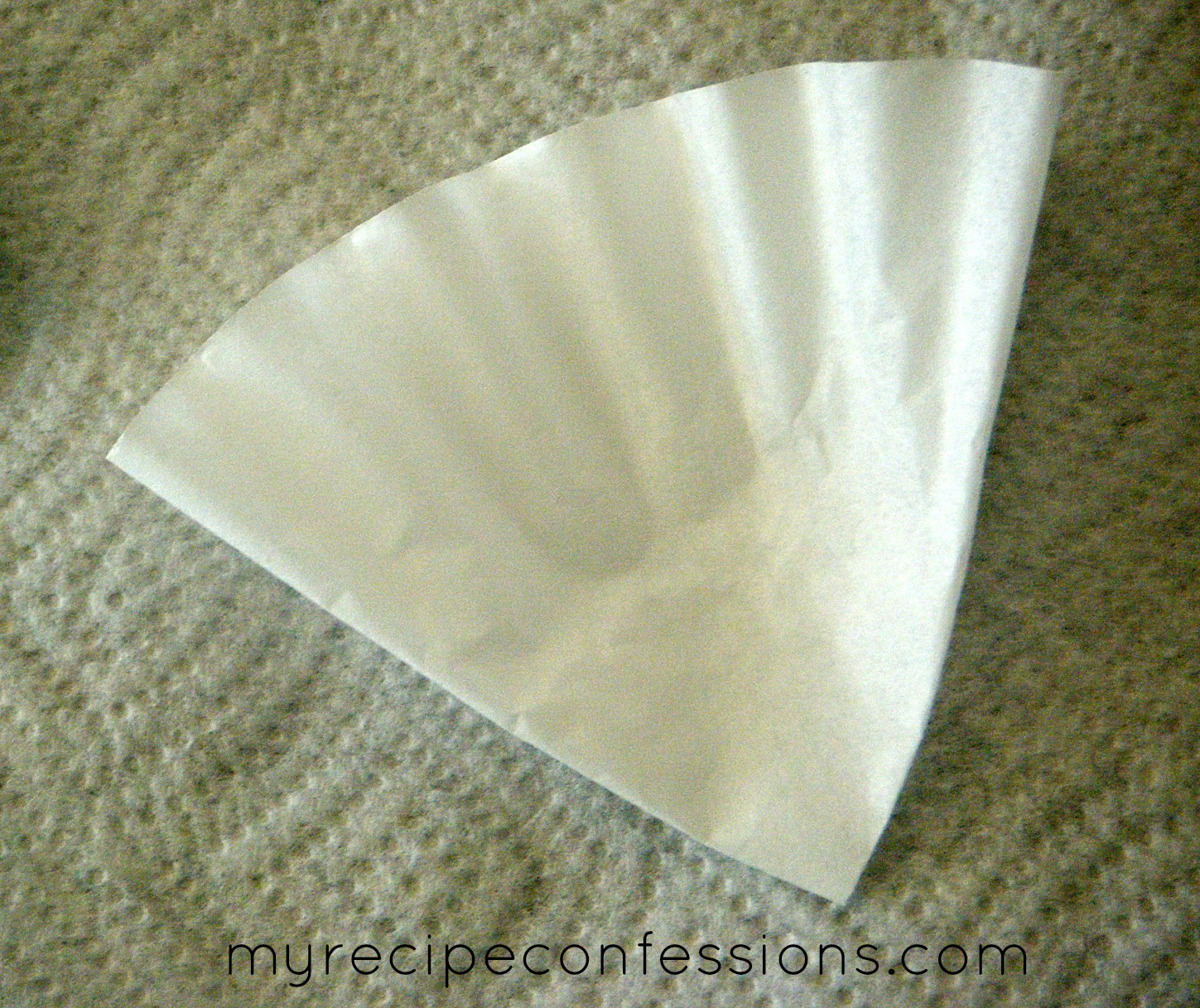 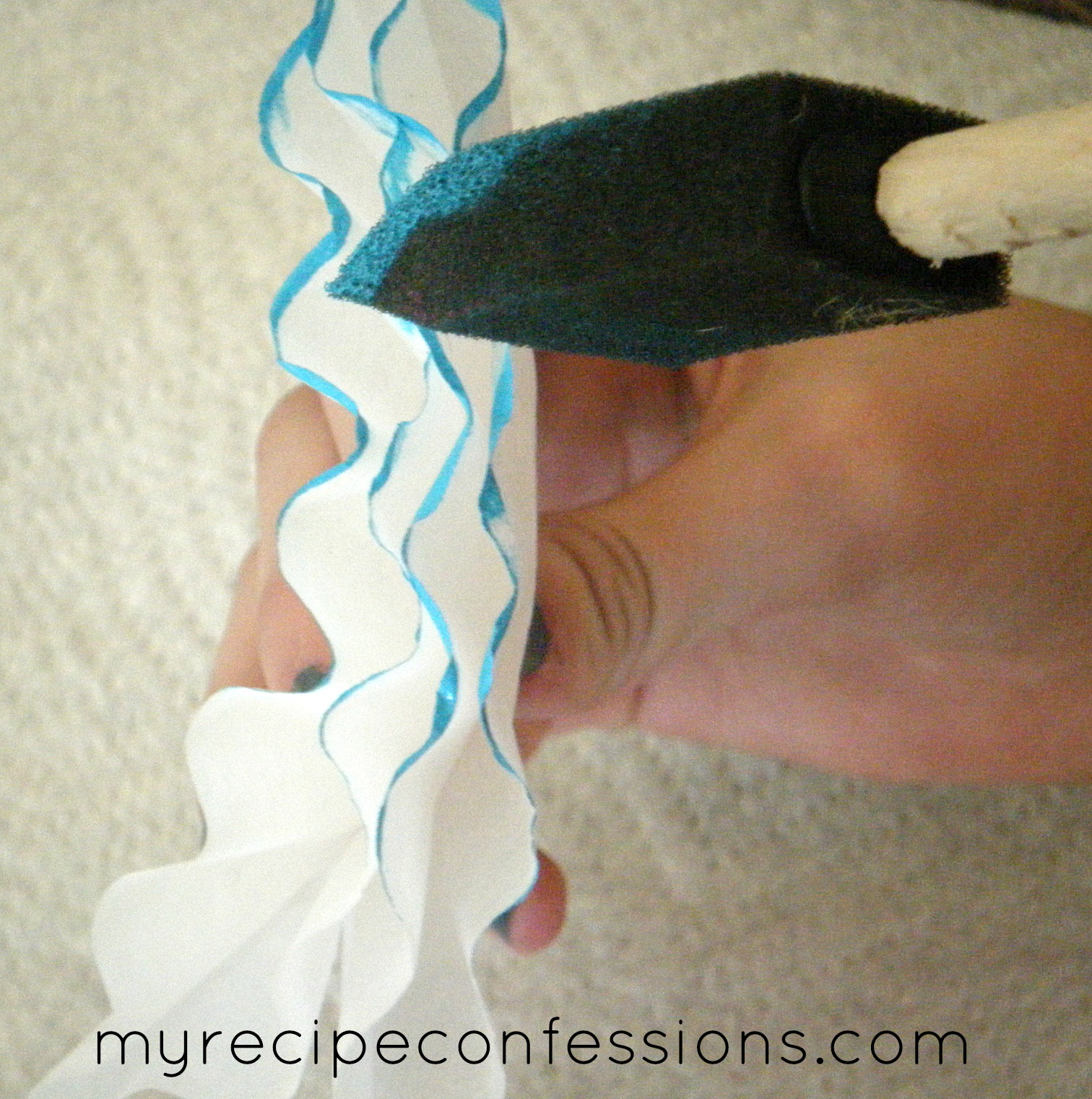 4. For the second layer, I layed the filter flat and I placed a dime size paint dallop in the center of the coffee filter. Using the foam brush, I  brushed the paint out toward the edge of the filter. I didn’t paint the entire filter. I left some white streaks expecially towards the edges. 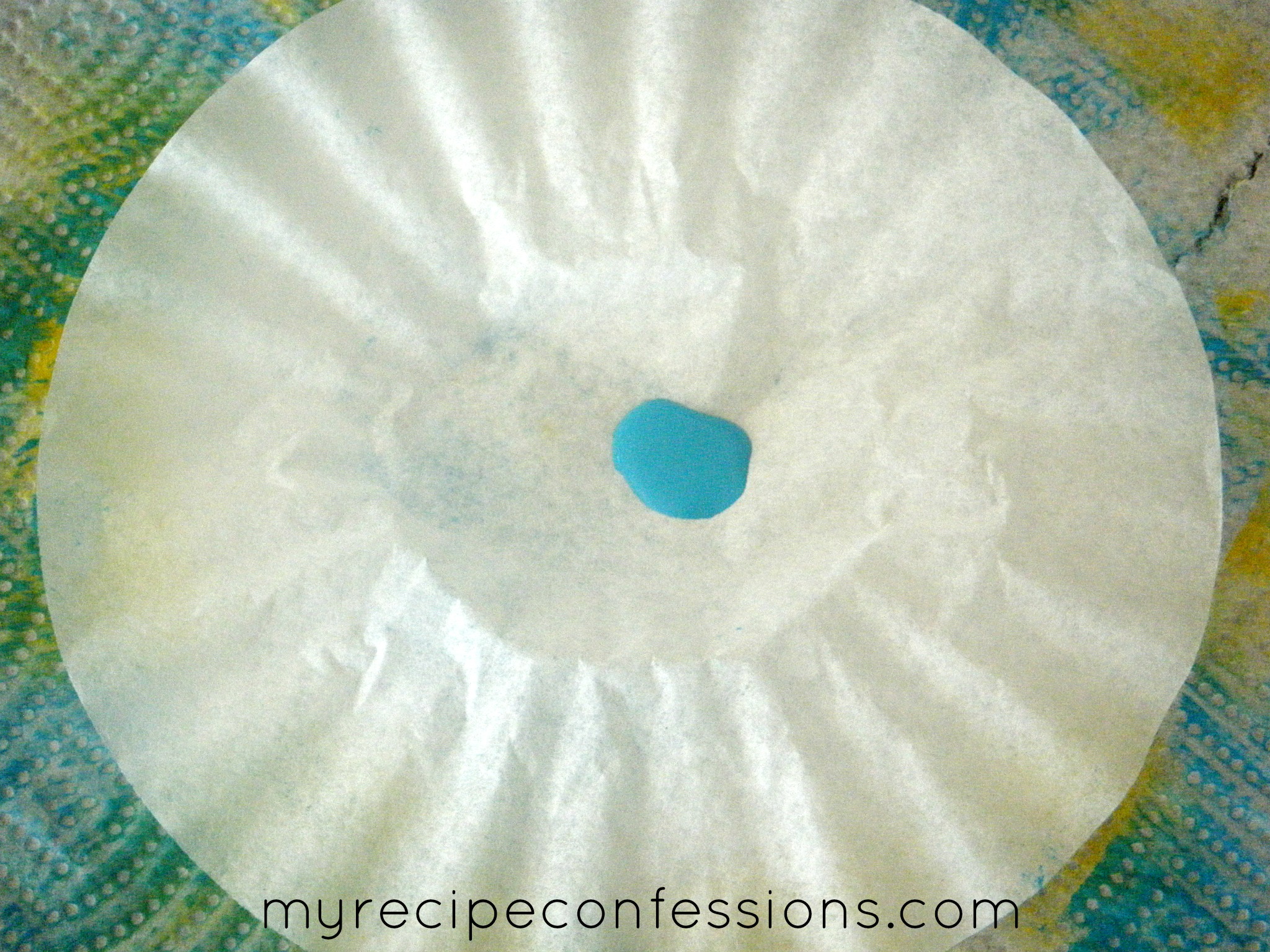 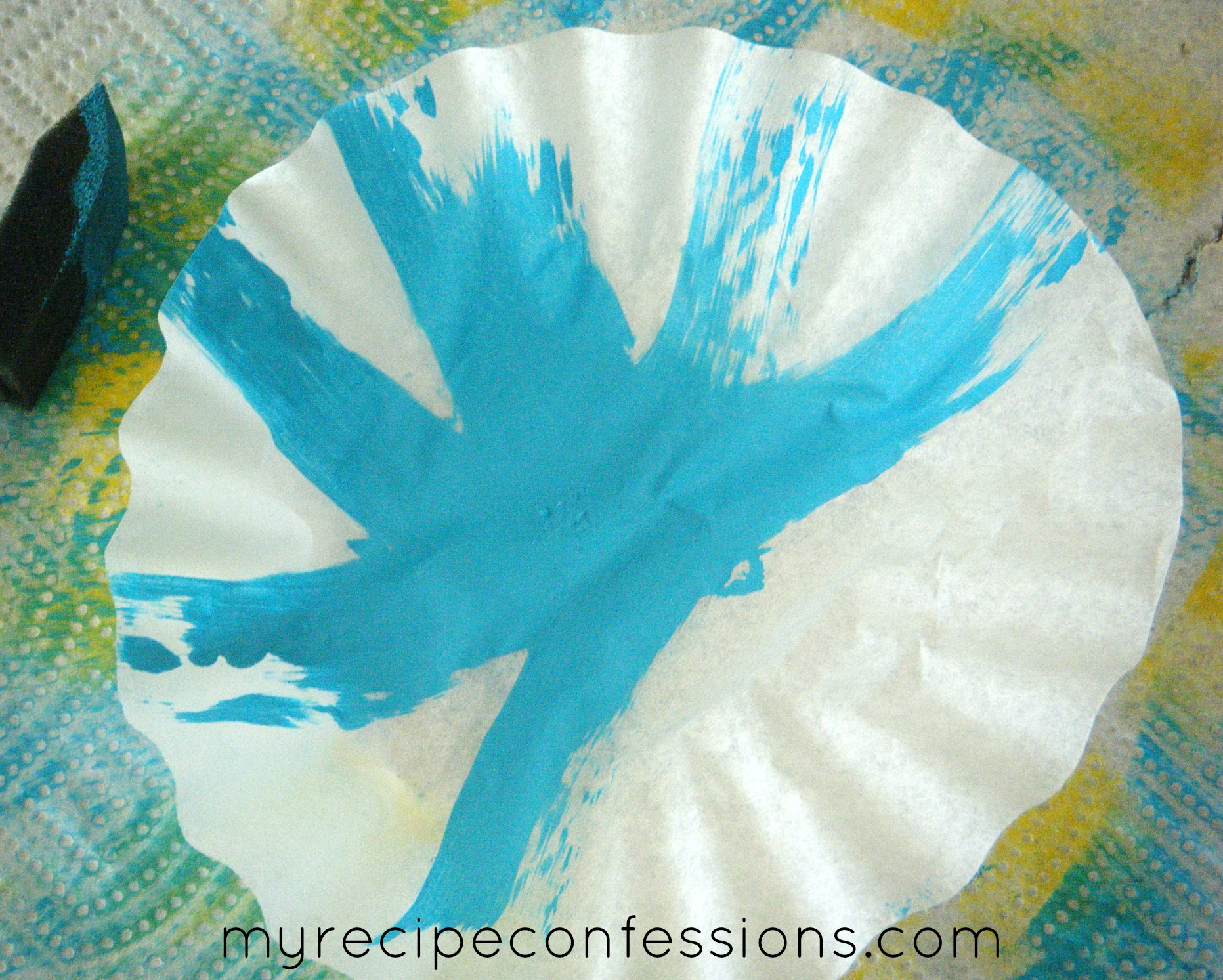 5. I repeated the same process with the third layer that I used for the second layer. I then let them dry completely. 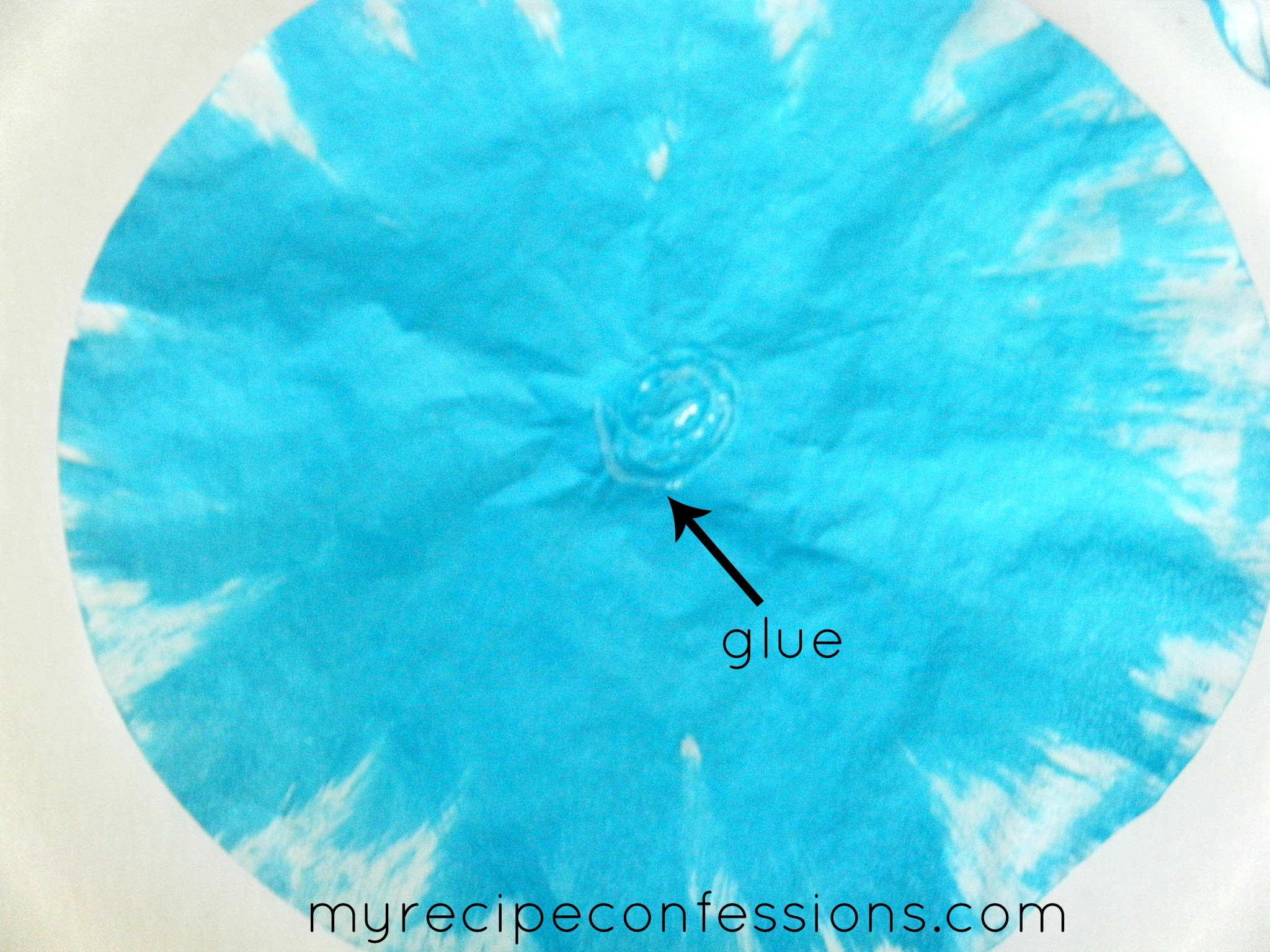 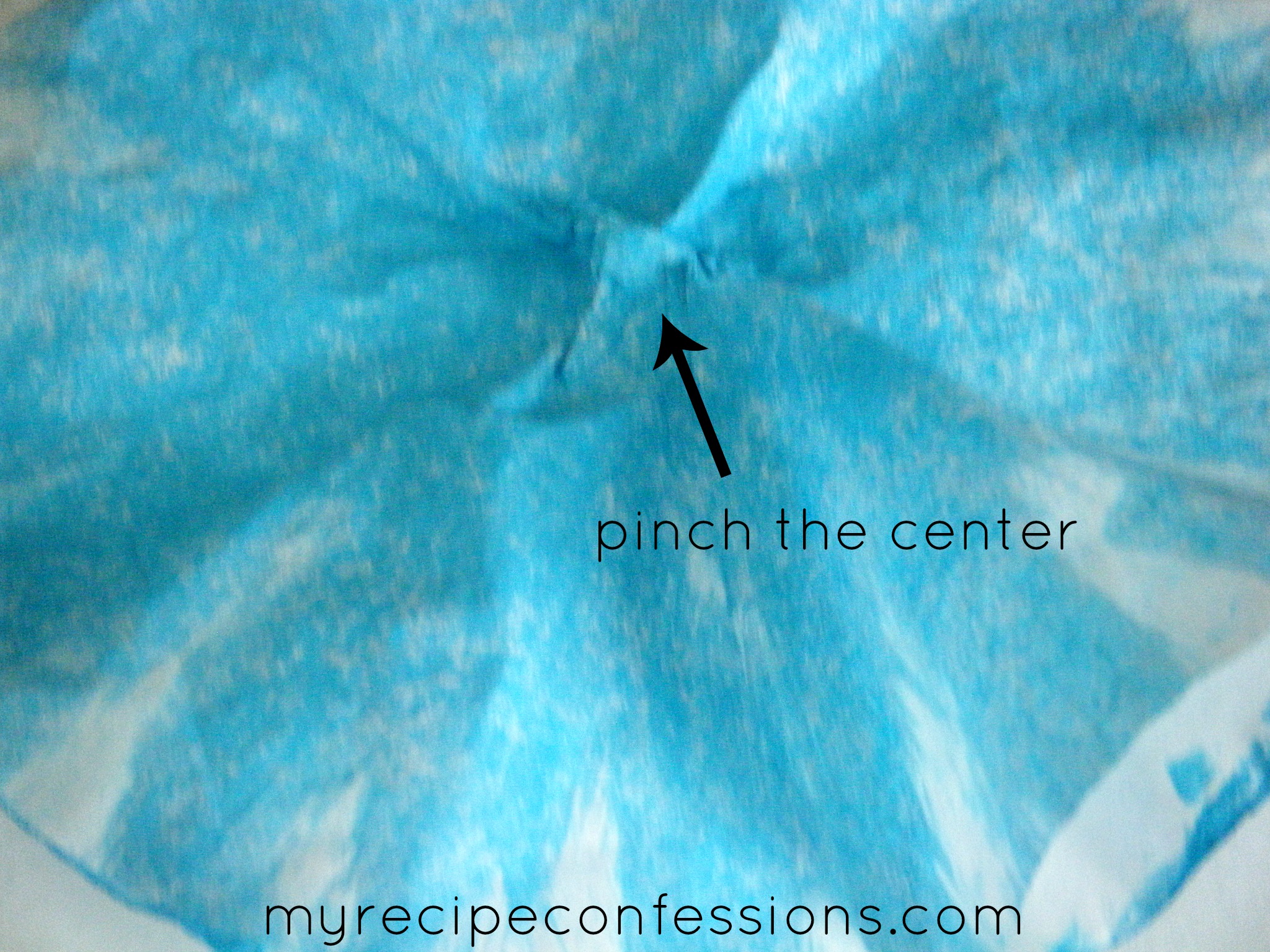 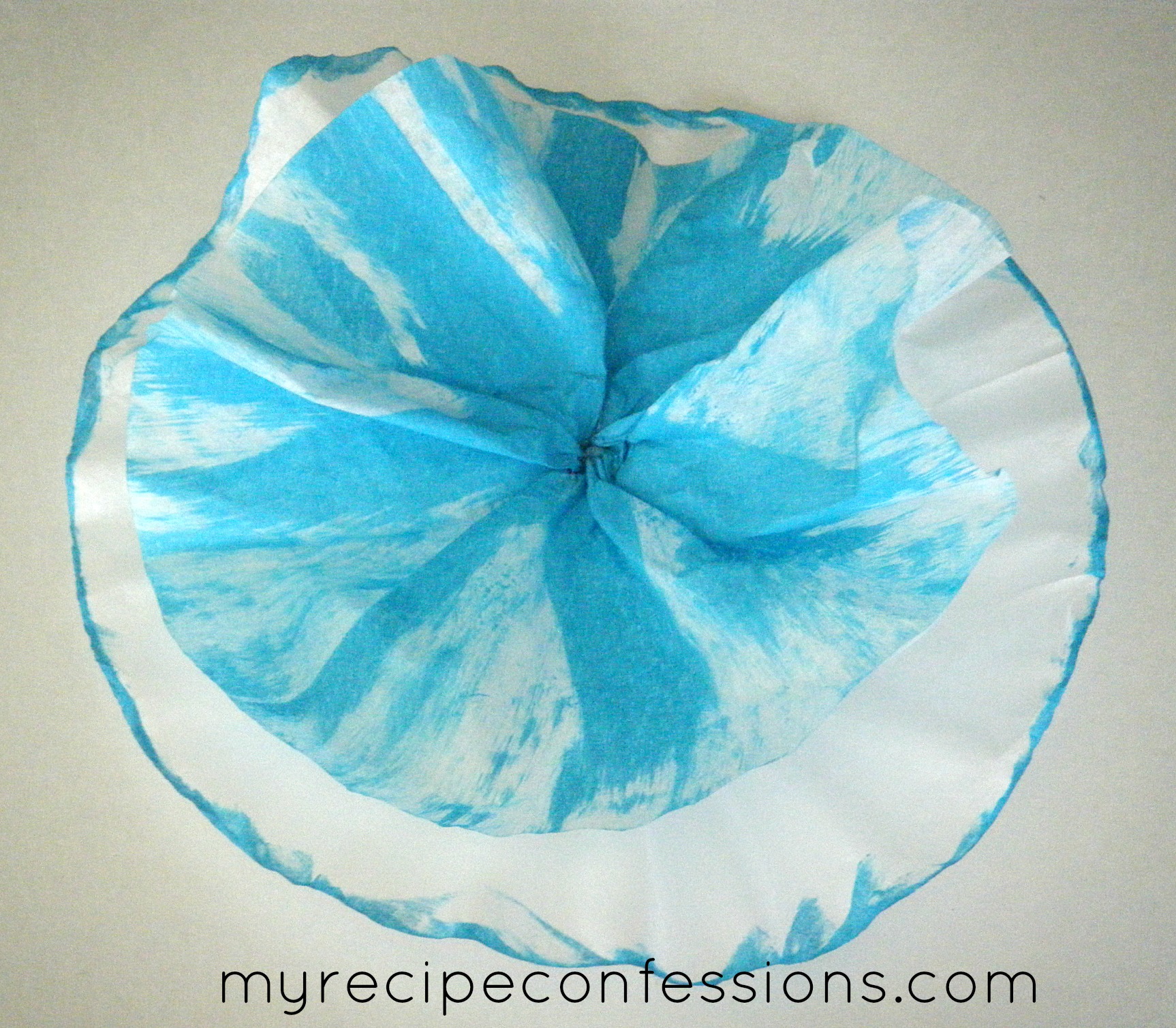 7. Next, I glued a large red button in the center of the flower.

8. For flower #2, I used the same technique as the first layer on flower #1 for all three layers. On the middle layer I did brush a few yellow streaks in the center. After all the layers were dried, I glued them together the same way I did on flower #1. Then I glued a large orange button in the center.

9. For flowers 3, 4, and 5, I folded the coffee filter in half a then cut 1/3 of the filter off. Then I cut 1 inch down from the top of the filter all the way across. I cut one corner of the 1 inch strip on an angle and folded it around to form a small cone and then I glued it in place. 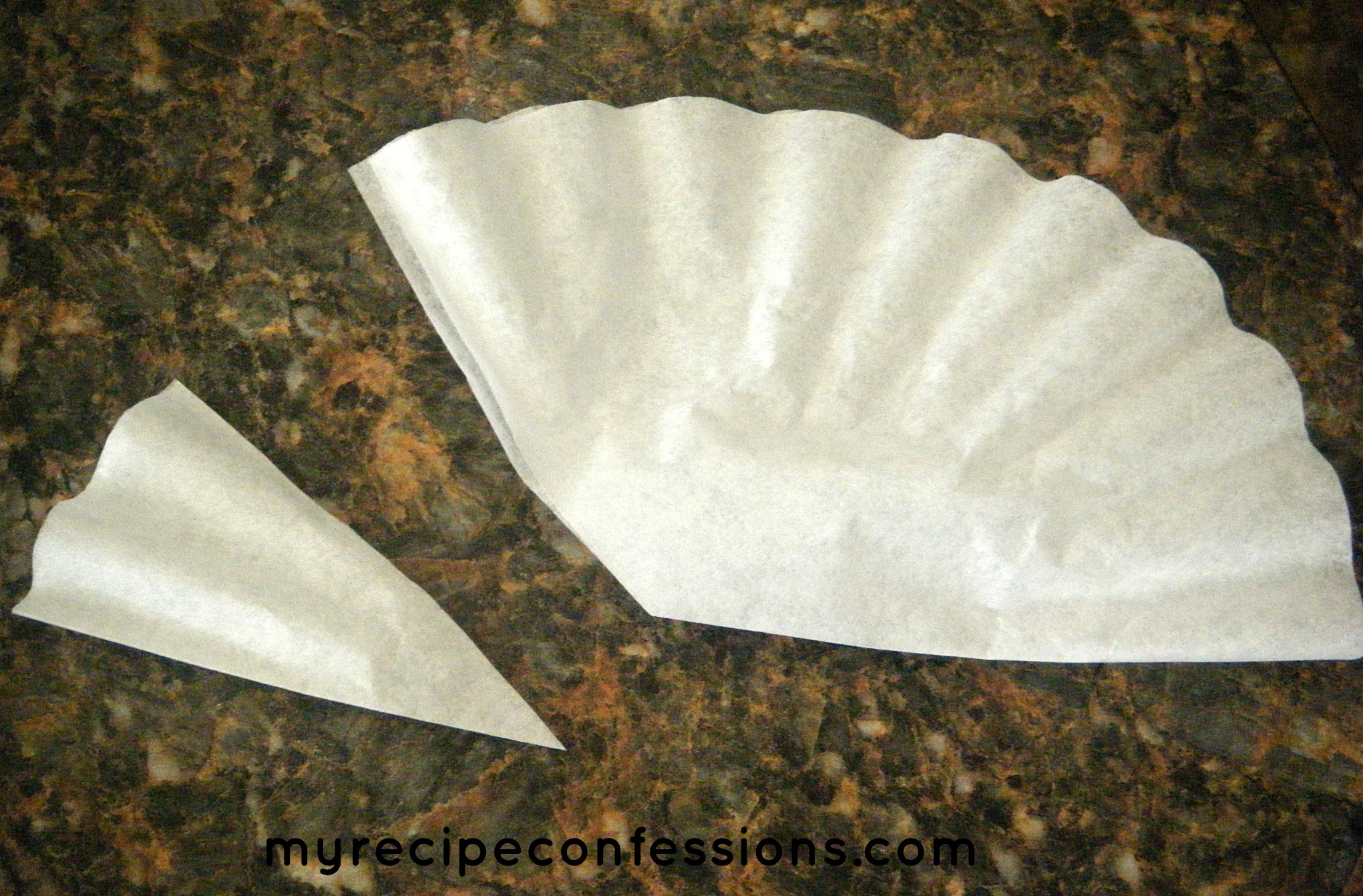 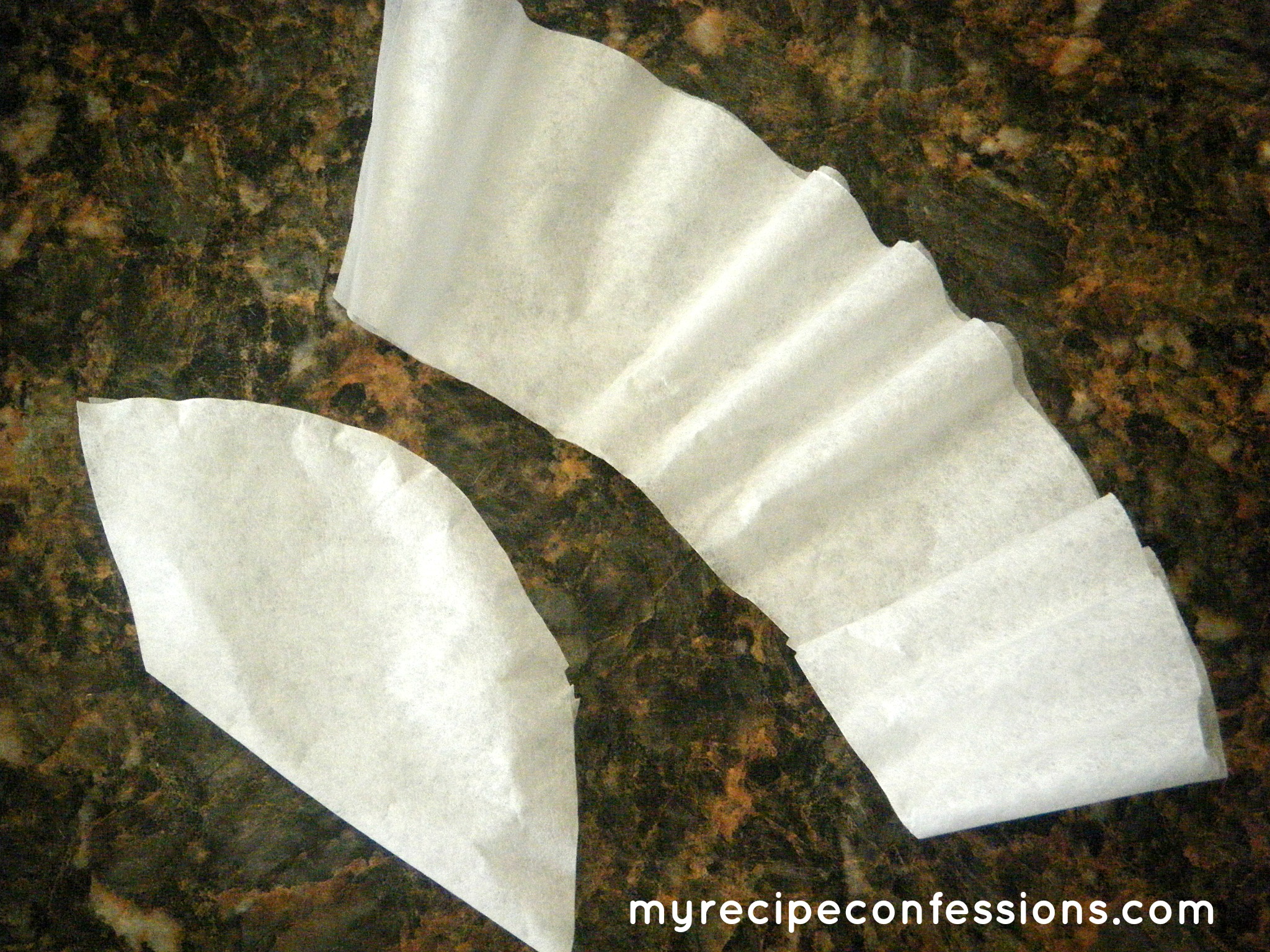 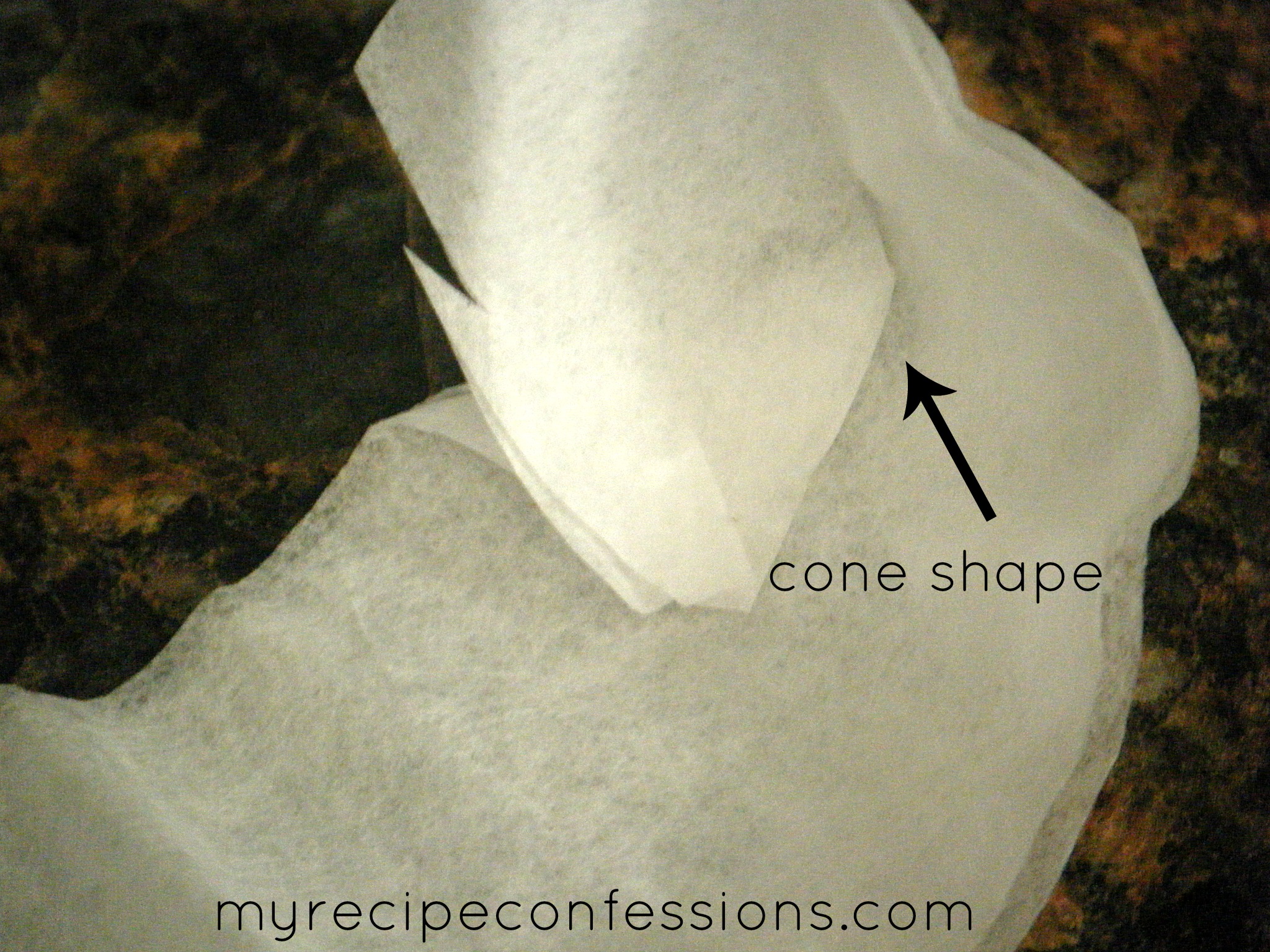 10. Placing a small dot on the outside of the cone I started wrapping the strip around the cone. With each new layer I placed another dot of glue to hold it in place.

11. After I had wrapped it all around, I cut the end of the strip on an angle so it wouldn’t stick out. Then I brushed yellow acrylic paint on the edges with the foam brush. Once it dried I placed a gold thumb tack in the center of the flower. I repeated this process two more times so I had three flowers total.

12. Once I had finished making all the flowers I glued the flowers in place on the wreath with the hot glue gun.

What do you think? I love how it turned out and I think it really pops against my red door. 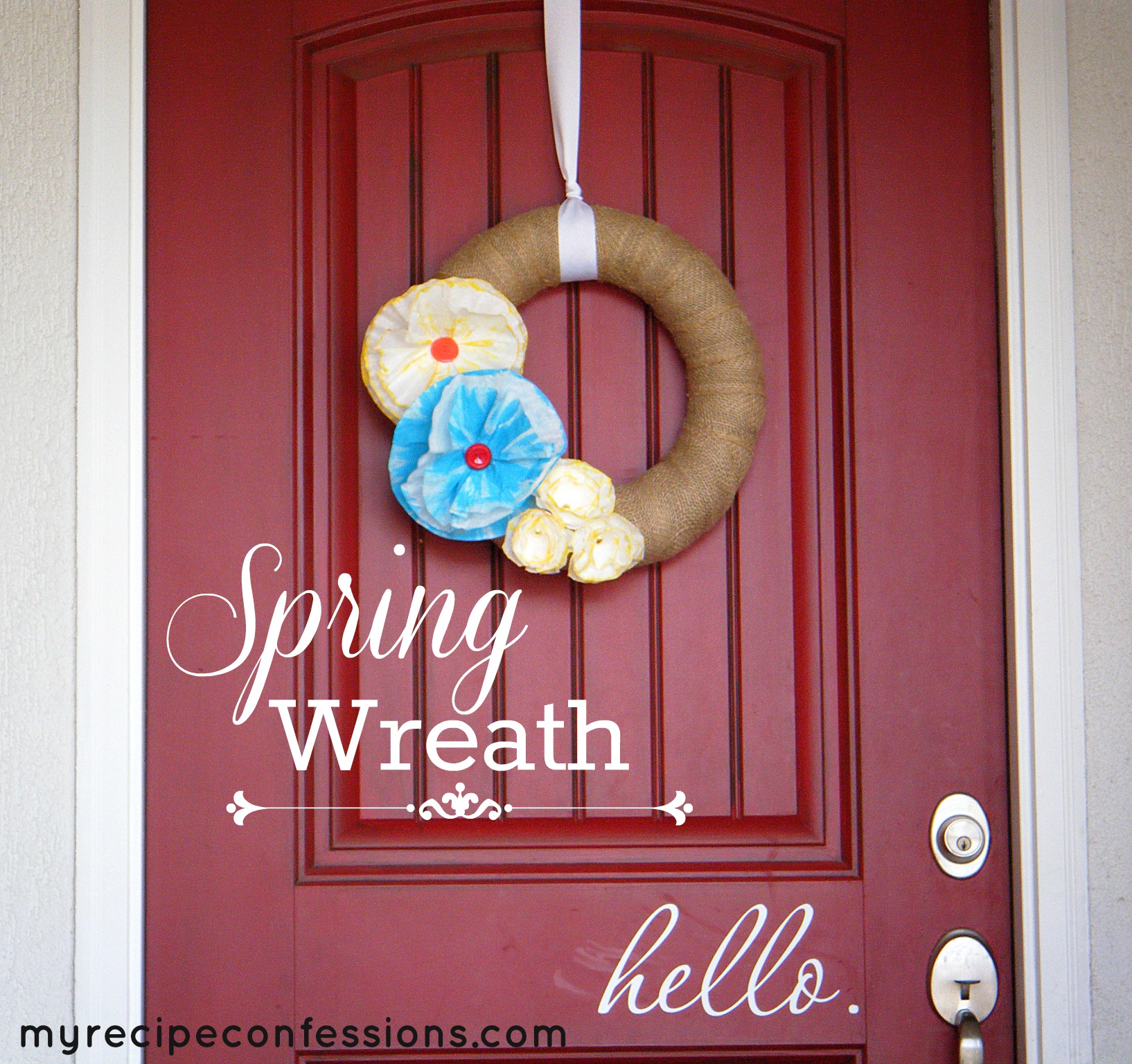