Homemade Apple Pie is the best apple pie you will ever taste! Everything about this pie is amazing, from the made from scratch flaky crust, and vibrant apple filling, to the sweet glaze drizzled on top of the pie before it is baked. You won’t find a better apple pie recipe than this one! 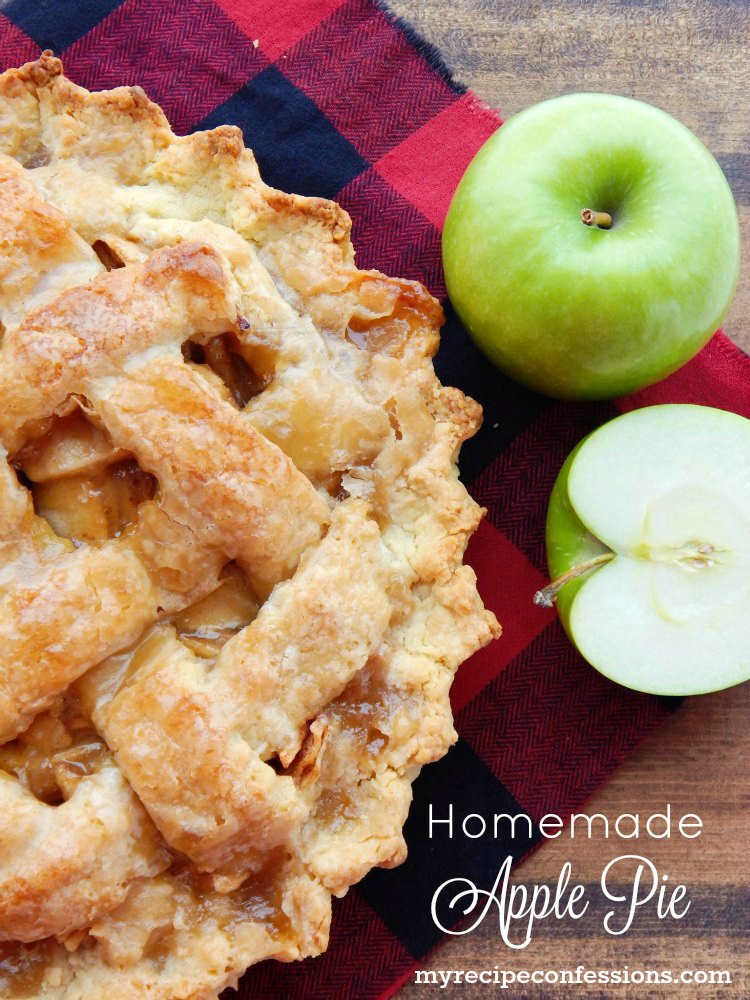 Nothing beats Homemade Apple Pie! Especially on Thanksgiving. However, it is a pie that takes a little bit longer to make, but it is definitely well worth the time!

This Homemade Apple Pie is like the classic apple pie that your grandma use to make. The caramel sauce that it poured on top of the pie before it is baked leaves a light glaze on the top of the pie as well as a rich caramel sauce throughout the pie. It is heavenly! My favorite way to eat this pie is hot out of the oven with a scoop of vanilla ice cream on top. But don’t take my word for it, try it out yourself. 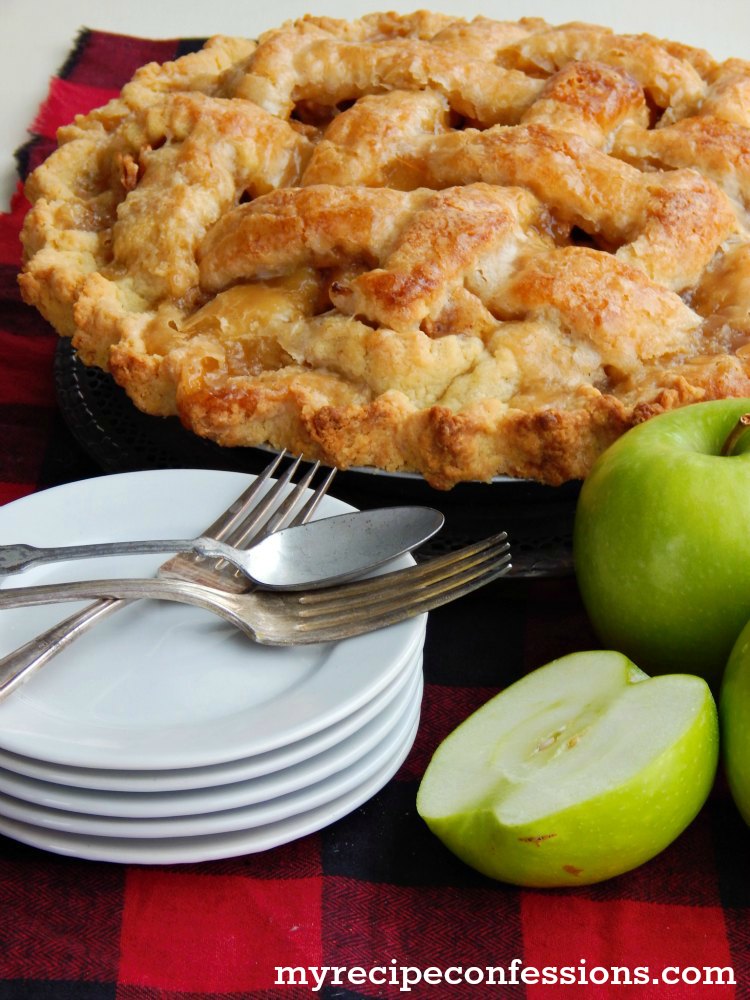 1. In a large ziploc bag or bowl, toss the sliced apples with the cinnamon, cloves, sugar, lemon zest, and lemon juice and set aside.

3.  Remove one of the dough discs from the refrigerator and follow steps 5-8 in the flaky pie crust recipe. Place the pie on a baking sheet lined with tin foil (for easy clean up) and add the apples to the pie, mounding slightly in the center

4. Remove the second dough disc from the refrigerator.  Unwrap the plastic wrap so that it is spread out on the counter. Place two more 12 inch sheets of plastic wrap over the top of the dough. Roll the dough out into a circle, rolling from the center to the edge. Turning clockwise and rolling to form an even circle about 1/8 of an inch thick and 11 inches in diameter.

5. Using a knife or pastry wheel, cut the dough into 1 inch strips. Lay the horizontal strips down over the pie first. Using the longest for the middle and the shortest for the end. 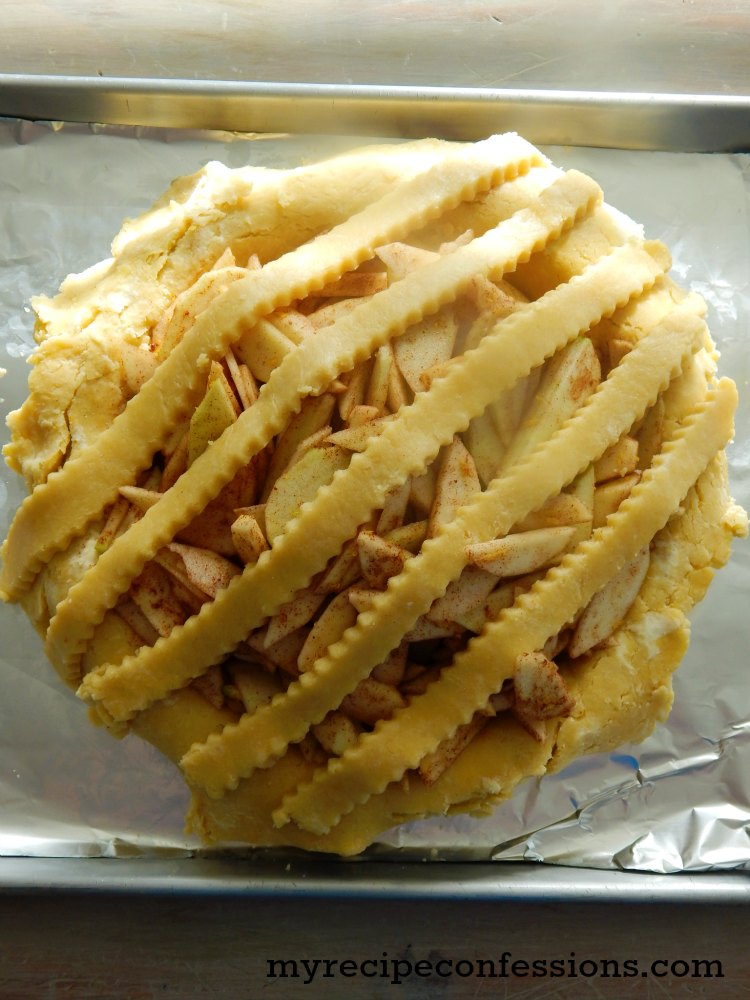 6. Fold every other strip back on itself. Starting in the middle, right next to the folded strip, lay a strip of dough vertically over the unfolded strips. 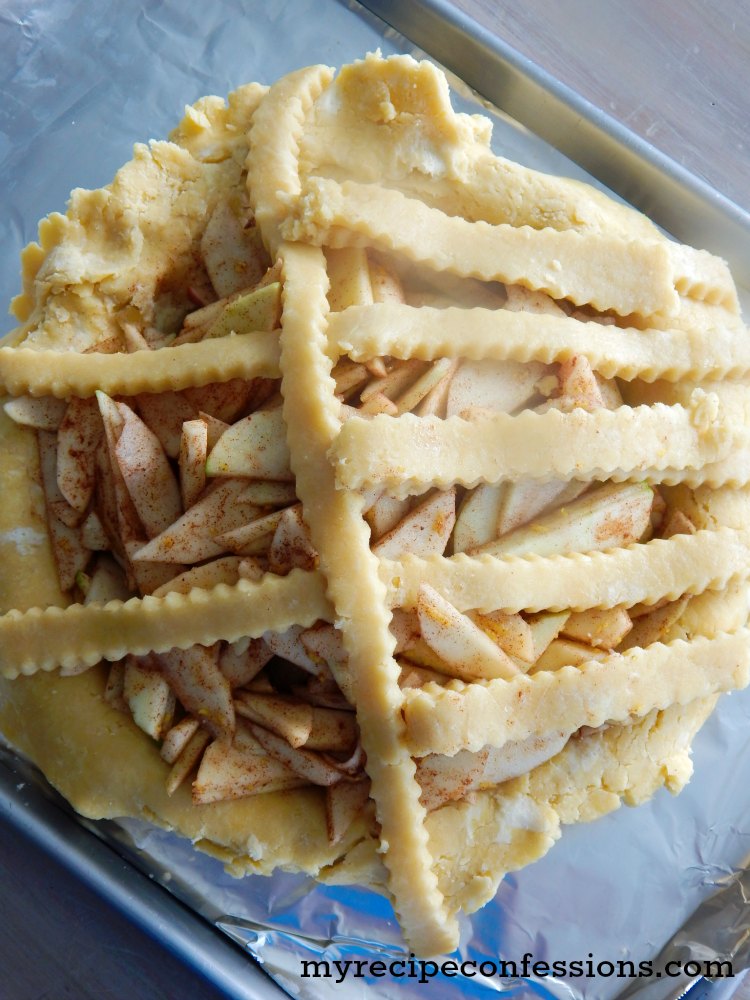 7. Swap the strips of dough by laying the folded strips down and fold the opposite strips over on themselves. 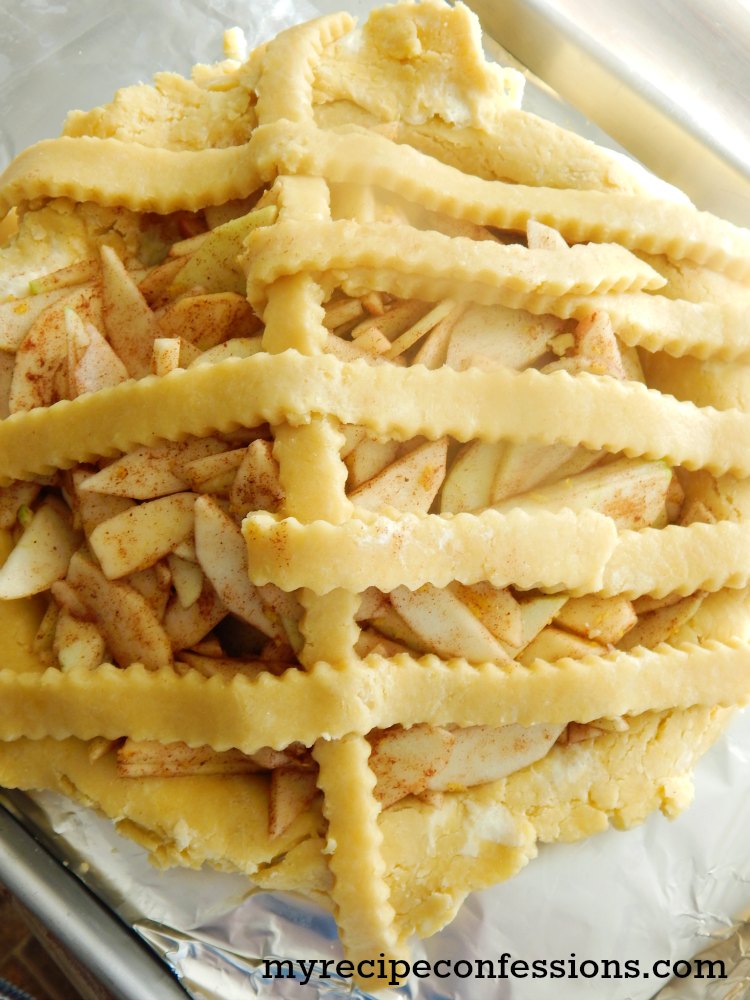 8. Lay another strip vertically over the horizontal strips. Making sure to leave a 1 inch space between the two vertical strips. Continue this process until you reach the edge of the pie. Then repeat on the other half on the pie and then shape edges as desired. Place the baking sheet with the pie in the fridge while you make the caramel sauce. 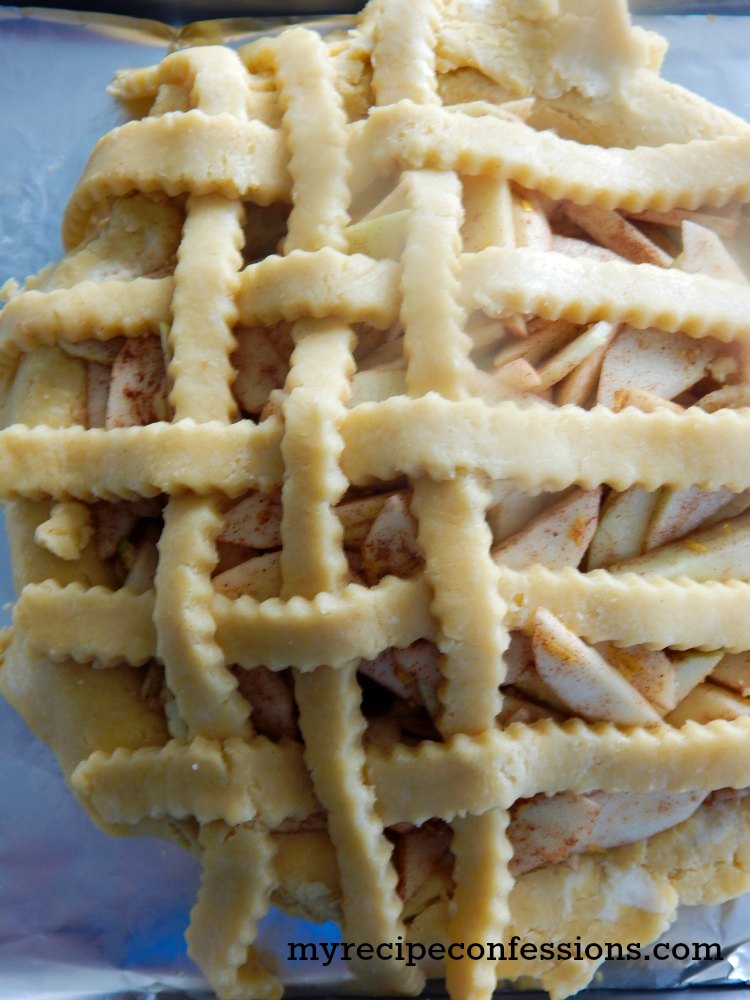 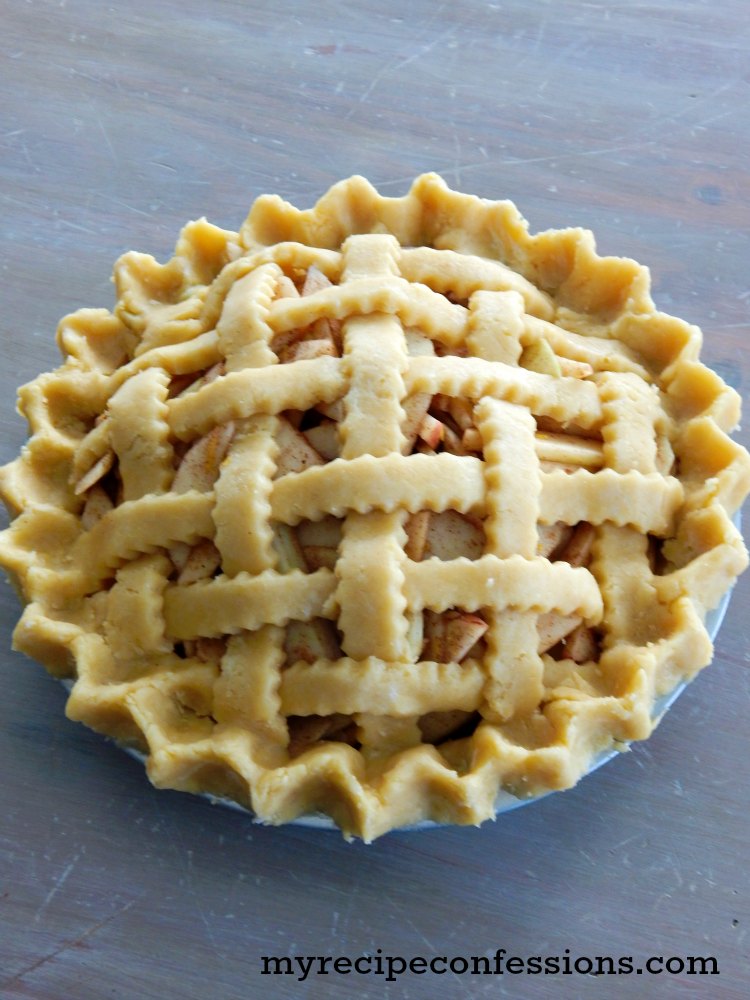 1.In a sauce pan over medium-high heat, mix the butter and flour together until the butter is melted and it forms a thick paste.

2. Stir in the water, brown sugar, granulated sugar, and vanilla. Bring to a boil and turn down the heat to medium-low. Simmer the sauce for 2 more minutes or until the sugar is dissolved.

3. Remove the pie from the fridge. Pour the sauce over the top of the pie. Place the pie in the oven and bake for 15 minutes at 425 degrees. Turn the heat down to 350 degrees and continue to cook for an additional 30-45 minutes until the apples are soft and the pie crust is golden brown. Remove from oven and allow to slightly cool before cutting. 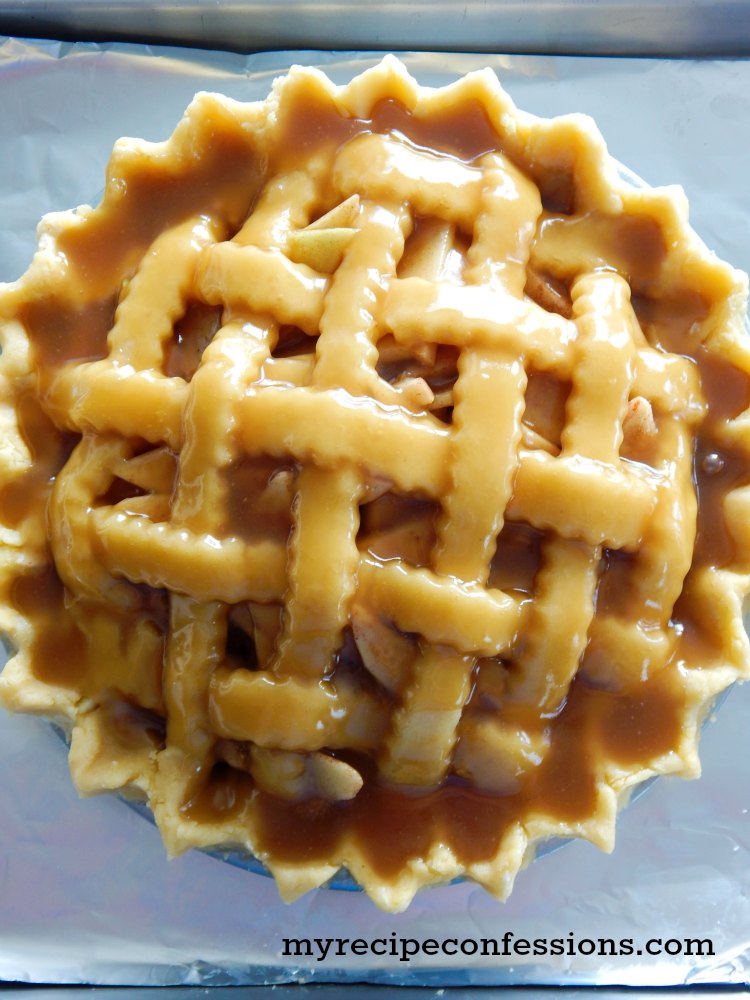 This recipe was adapted from Apple Pie by Grandma Ople.

Here are a few pie recipes you might enjoy. 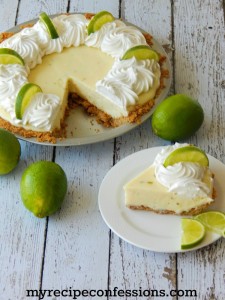 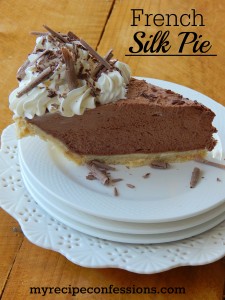